Opportunities for Green Financing in 2017

On January 20th, Leaders in Energy partnered with DC Net Impact to host a conversation on Green Financing. Held at a WeWork location in downtown Washington, DC, the event featured a panel of three experts who examined current as well as potential new funding sources for energy and sustainability programs, including in the private sector, international initiatives, and possibilities that may exist under the Trump Administration.

The event kicked off with introductory words from moderator Janine Finnell, Executive Director and Clean Energy Ambassador for Leaders in Energy, who thanked all those who made the event possible, as well as the many attendees for braving the pre-inauguration police blockades, metro closures, and traffic to participate.

The three speakers were introduced:

Leanne Tobias opened by asking if the Trump infrastructure plan can be made sustainable “in any imaginable way,” explaining that the “infrastructure plan is our best shot to achieve sustainability and energy efficiency.” Some priorities, such as distributed generation, are a good fit with Trump’s plan. She highlighted some of the issues that need attention, such as improving efficient use of energy in water systems, as currently a significant amount of energy is needed to move water from its source to end use. Leanne also explained that state revolving funds for infrastructure currently get $2 billion per year from the federal government, but the Trump campaign platform proposed tripling this funding.

Another infrastructure program that might be sustainable is the Republican-sponsored Public Buildings Renewal Act from 2016 (which could be added to the Trump infrastructure plan). Leanne also discussed the possibility of using block grants issued through states to finance infrastructure, in addition to publicly-issued bonds—‘Make America Great Bonds,’ if you will—to allow citizens to “have skin in the game.” Leanne made a surprising and convincing case for sustainability and green finance opportunities under the new Trump administration.

Panelist Stacy Swann wore two hats for the evening, as a member of the Board of Directors for the Montgomery County Green Bank, and from her knowledge of the Green Climate Fund (GCF). Discussing the two mechanisms, though very different in scope, she was able to draw lessons on how to “capitalize private investments and public dollars” for sustainability and green energy projects.

She explained that the Green Bank is not a consumer bank, but takes public dollars and leverages private investments for projects that include catalyzing solar and energy efficiency, and improving sustainability in low-income housing. It is set up as a 501 (c) (3), and now that the Bank has put the “building blocks” in place, they hope to close the first investment during this fiscal year. With the goal of “scaling up sustainability investments” in areas such as low-income housing, the Montgomery County Green Bank – and other organizations like it – may prove an effective solution to the financing gap.

After showing how infrastructure can be a job creator, and demonstrating how the Montgomery County Green Bank is generating local investment in sustainability, she provided an overview of the Green Climate Fund. The Fund is a $10 billion (and counting) financial mechanism established in 2010 by the 194 countries party to the United Nations Framework on Climate Change (UNFCCC). The GCF “allocates its resources to low-emission and climate-resilient projects and programmes in developing countries.” The Fund designates 50% of its capital for climate change mitigation activities and 50% for adaptation strategies.

Musa Collidge-Asad focused on ways to “think forward,” shifting business goals to perform against social and environmental as well as financial goals – in other words, the “Triple Bottom Line.” This business model emphasizes clean and alternative energy sources that can provide cost savings to businesses, while limiting their impact.

But while there are significant opportunities in the “evolving world without borders,” Musa said there is also an increasing focus on niche areas, both from investors and those seeking investment. Because of specialization in sustainability projects, Musa explained, “building relationships between different niches and geographic areas has become increasingly important for finding capital.” But exactly how to connect those with the money to those who need it is no easy task.

Musa spoke about his work in developing a hybrid online platform in order to pair capital with clean energy projects, one that both automates and catalyzes the process of financing such projects. Through the platform, investors looking to support clean energy projects can get a free screening report. On the other side, those looking for investment can get a “financeability report” in order to get a sense of qualification for funding sources. 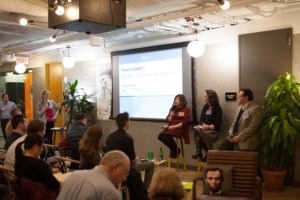 He also spoke about the value of P3s (also known as Public-Private Partnerships, or PPPs) for infrastructure projects, particularly as there are certain markets that are evolving quickly. Virginia and Texas are leaders in the P3 space, with Maryland catching up, as the process of integrating public and private partnerships has been made more efficient. Other funding sources include the Department of Energy grants for clean tech – many firms got federal feasibility type grants.

After briefly presenting their cases and solutions, the floor was opened up to questions from the event attendees. Beth Offenbacker, a consultant in emotional intelligence, mentioned a series of articles, including one that discusses the role of leadership in successful P3 partnerships, one on the P3 experience of Arlington, VA, and a piece on potential pitfalls of such partnerships. Noting that some projects leave the public sector high and dry, due to the substantial resources at the disposal of the private sector parties for P3 negotiation, Musa and Leanne agreed that capacity building for public sector officials involved in negotiations is key to strengthen the position of the public sector.

Municipal bonds were also discussed as a financing instrument. During the economic downturn, issuance volume went down, and the municipal bond process became less integrated. P3 projects can be great opportunities for green infrastructure, but the maintenance aspect of sustainability projects are often not financed. P3s can provide a good long-term effective bond mechanism. Stacy concluded by saying that while there’s still a long way to go, if we’re “prone to dreaming, every bond should be green.”

The panelists gave the audience a lot to think about. As the world ended 2016 with another record for the hottest year, and as we are entering the new year with a new presidential administration in the U.S., there are many unknowns as to how to finance clean energy and energy efficiency projects in the U.S. and around the world, but also great potential to grow and enact better policies to support energy efficiency.

The event concluded on a hopeful note, with new perspectives, ideas, connections, and of course, great contacts.

Here are some additional helpful resources on related topics.